Hydrogen, is the first element and most abundant chemical element, estimated to make up 75% of the mass of the universe, and when burned, it releases only energy and water.

Vast amounts of hydrogen atoms are for example contained in:

However, while it’s present in almost all molecules, it’s very scarce as a pure gas (less than one part per million). Instead, it is almost always found as part of another compound, captured in for example water, methane or ammonia (H2O, CH4, NH3).

Sustainably harnessing hydrogen as a gas (H2) on a large scale in order to fuel the private and industrial sector.

We are HyFive, a company that aims to become the leading developer, owner and operator of a pan-European network of vertically integrated renewable hydrogen facilities, providing safe, cost competitive and reliable industrial volumes of green hydrogen across Europe.

Our portfolio basis is strategically located throughout Europe, starting in the Iberian Peninsula, and growing into Germany, Netherlands and other European countries with industrial scale green hydrogen facilities. Our aim is achieve 1.5 GW of green hydrogen by early 2035.

Hydrogen is obtained from high purity water, releasing pure oxygen in the process, and doesn’t emit any polluting gasses, particles or whatsoever during production nor consumption.

Green hydrogen can be stored without losses of energy over long periods of time, opposed to for example batteries. This allows it to be used for other purposes and at times other than immediately or only shortly after its production. Aspects like intermitted availability of renewable energy can thereby be overcome, while still meeting demand.

Hydrogen can be stored and transported pure, in liquid or compressed gaseous form, or making use of a carrier like ammonia, methanol, or a Liquid Organic Hydrogen Carrier (LOHC). Especially in liquid form, hydrogen It has a very high energy density, making it very suitable for transport or storage.

In compressed gaseous form energy density depends on pressure. Whereas not the same density can be achieved as in liquid form, compression makes still a viable option for storage and transportation. In the mobility sector two pressure standards are being used, 350bar for commercial transport, i.e. for trucks and buses, 700bar for personal vehicles.

Hydrogen has many different applications. Besides for combustion (heating) it can for example be transformed into synthetic gas or electricity for commercial, industrial  and mobility purposes.

Hydrogen can be used for heating for buildings as well as in industrial processes.
With hydrogen much higher heating temperatures can be achieved compared to electric heating, making it the only suitable alternative for fossil fuels in many industrial uses.

Hydrogen can serve as feedstock or catalyst in refining and petrochemical processes, and also in fertilizer, paint, food and chemical industries.

Unlike all fossil fuels like coals and oil, green hydrogen is a clean energy source that only emits water vapor and generates heat, leaving no harmful residues in the air.

Green hydrogen is carbon free and it plays a key role in the decarbonisation of the industrial, private and mobility sectors.

The race to decarbonise our planet has begun. Join us by embracing green hydrogen as leading solution for security of supply as well as to reverse climate change.

As strategic developer, owner and operator, HyFive will be active across the entire value chain, including generation of renewable energy, production, transportation, storage and commercialisation of green hydrogen and related green energy products such as ammonia and biofuels.

We can hereby go as far as to provide full turnkey solutions for our customers, including provision of receiving infrastructure, refuelling stations, hydrogen fuelled Fuel Cell Electric Vehicles (FCEV) and financing thereof.

HyFive will provide end-to-end carbon neutral solutions to industrial customers looking to switch to green energy fuels and will be critically present throughout the energy procurement process to support its customers in every step of their energy transition. 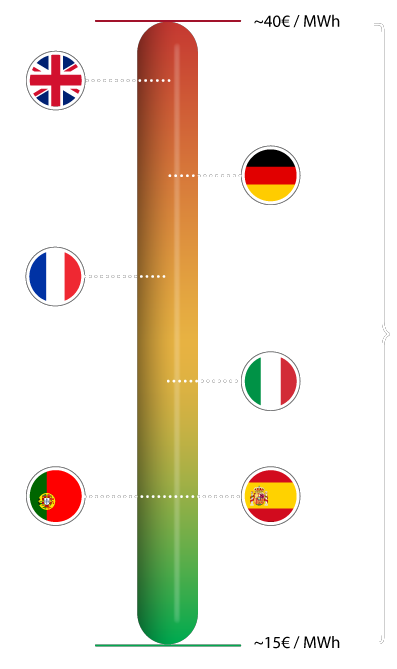 Hydrogen production costs in Spain, on the basis of renewable energy, are ~40% lower than in Northern Europe

The Iberian peninsula has many advantages compared to regions with lower solar or wind intensity, in combination with abundantly available land.

Significant portion of land with no current added value use, resulting in low prices and high availability of large plots of land.

Iberia, is set to become a regional leader in renewable development over the next decade as a result of a mix of unique characteristics in Europe

At HyFive we strive to become the reference partner for the implementation of sustainable industrial scale decarbonisation strategies for industries across Europe. The key to accomplish our mission and respond to our stakeholders’ expectation is sustainable growth.

Vertical integration, first-mover advantage and focus on doable projects in the near term mitigate the risks of an emerging market, while retaining full upside potential.

in order to meet growing sector demand and meeting the EU ambitions.

+ 0
Companies screened and selected in different sectors in Spain and rest of Europe
+ 0
identified and engaged potential green hydrogen offtakers.

Mobility is the engine that powers our daily lives, both in private and industrial uses. In terms of sustainable mobility, green hydrogen is one of the greatest fueling alternatives to traditional energy resources. In recent years, newly opened hydrogen refueling stations have been annually breaking record numbers, with more than 685 operating hydrogen stations worldwide by the end of 2021 and a rapidly expanding HRS network throughout Europe.

Key advantages of hydrogen vehicles are that they offer a greater level of autonomy, less dependence on the battery and, unlike traditional electric vehicles, refueling times are shorter, similar to those of combustion vehicles. In addition. Fuel Cell Electric Vehicles (FCEV) are extended range vehicles, more suitable to operate in mountainous areas and operate flawlessly in hot and cold climate conditions than battery electric vehicles. Material efforts to expand the network of hydrogen stations must be made in order to accelerate the hydrogen mobility sector.

It’s necessary to install a dense network of HRS across Europe; Spain aims to have a network of more than 100 hydrogen stations by 2030. All over Europe there are national ambitions and policies aiming to rapidly grow the HRS network.

In order to support a rapid clean energy transition and reduce greenhouse gas emissions, the global hydrogen production must double every year to 2030, dramatically changing the energy landscape.

Hydrogen is a clean fuel that, when consumed, releases only energy and water. It can be produced from domestic resources such as fossil fuels, biomass and water electrolysis. It can be used to store, move and deliver energy.

Hydrogen from fossil fuels is called grey hydrogen and obtained from carbon, methane or natural gas steam reforming. When the CO2 that is thereby emitted is captured, the hydrogen is called blue.
When Hhydrogen is made from steam reforming biogas is called clean hydrogen, but releasing CO2 and other impurities in the process. Hydrogen can also be produced through water electrolysis, and only when the source of power is renewable energy, can be called Green Hydrogen.

We generate green hydrogen through an electrolysis process powered by renewable energy sources, such as wind, solar and hydro.

Today, about 95% of all hydrogen is produced from steam reforming of natural gas. Help us transform the energetic landscape and tip the scale in favor of green hydrogen production. The primary challenge for hydrogen production is reducing the Levelized Cost Of Hydrogen (LCOH) through advanced mass production technologies, improved electrolyser and fuel cell design with better efficiencies and less usage of rare and expensive materials, competitive renewable energy and lastly, scalability.

Our plants reuse and adapt existing energy installations, resulting in significant cost reductions, which allows us to generate hydrogen that competes with conventional energy fuels on a cost basis.

Get to know BenortH2, our Green Hydrogen Plant in Biscay, Spain. A pioneer in adapting traditional energy facilities to achieve decarbonization of regional industries and mobility. It reuses and adapts existing energy installations by taking advantage of the infrastructures of a conventional plant, strong partners and Spain’s national gas pipeline network.
Manage Cookie Consent
To provide the best experiences, we use technologies like cookies to store and/or access device information. Consenting to these technologies will allow us to process data such as browsing behavior or unique IDs on this site. Not consenting or withdrawing consent, may adversely affect certain features and functions.
Manage options Manage services Manage vendors Read more about these purposes
View preferences
{title} {title} {title}